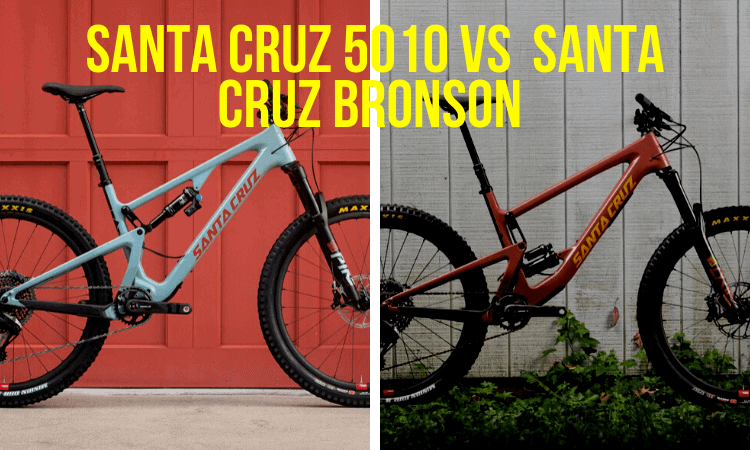 The main differences between Santa Cruz 5010 vs Bronson are:

For kids and even adults, Disneyland is a once in a lifetime experience, one which draws over eight million visitors per year to experience the magic. In fact, The Magic Kingdom alone is considered the most popular theme park in the world.

Which puts into perspective how sweeping of a claim it is to label one location as the Disneyland for mountain biking.

And unlike Disneyland’s sunny and bustling California location, the attraction for mountain bikers, to others, may seem more obscure, and, so to speak, of the bean road: Bentonville, Arkansas, yet another example of a growing interest in mountain biking.

And with that comes new, innovative models like Santa Cruz 5010 and Santa Cruz Bronson.  Mountain bikes, though, of all kinds, can be quite an investment, so you want to make sure you do your research before you make a purchase–and possibly take a road trip.

Before you hit the Oz Trails, or find your own equivalent of Disneyland for mountain biking, read on as we examine if Santa Cruz 5010 or the Bronson, compared, is your best bet for a new bike.

New to biking or simply not sure where to start? We’ll also be addressing your frequently asked questions.

How do I choose the right mountain bike?

No matter what kind of mountain bike you purchase, there’s a set of criteria you always want to look at:
1. Materials for performance and durability. Steel, titanium and carbon fibre are the most common. Steel and titanium will provide more durability and absorb pressure, but carbon is lighter and easier to manoeuvre. You should also note overall weight; a heavier bike may be more suited for rugged conditions, while a light bike accelerates more easily.
2. Wheel type and size. Wheel type and size affects the level of traction, acceleration, and what terrains the bike is suited for.
3. Suspension Frame. The suspension frame impacts the way you ride and ranges from low suspension for downhill bikes to high suspension for climbing. There is also hardtail and full-suspension frames.
– Hardtail works for less demanding trails and saves you money, but full suspension handles heavy-duty biking better.
4. Handle Reach. Handle reach refers to how far or close handles are from your seated position, with longer reaches making for a more smooth ride, and short reaches providing more manoeuvrability.
5. Adjustable Fork and Frame Protection. Adjustable forks allow you to improve the ride for your riding style and can lead to better shock absorption, while frame protection adds to the longevity of your mountain bike. Frame protection sometimes comes in the form of removable guards or special materials.
6. Quality Breaks. Pay attention to what kind of breaks the bike includes. The most preferred are disc brakes, as they offer the most instability and control. Mechanical breaks are lower cost but may not last as well.
7. Shock Absorption. With any mountain bike, you’ll want to look for shock absorption, but where and what depends on what kind of bike. Rear shocks, for example, support full front suspension.
8. Angles and Bike Geometry. The seat angle, chain length, and wheelbase all impact how the bike rides.

Santa Cruz 5010 and Santa Cruz Bronson are both best classified as a crossover, All Mountain or Trail bikes, balancing durability and manoeuvrability.

Santa Cruz Bronson is a compelling model in a number of ways. While technically a trail bike, it has much in common with an Enduro bike. Compared with Santa Cruz 5010, it’s heftier and more capable of traversing rocky paths. It does share characteristics with a typical Enduro bike, which are known to be the stronger cousin of other mountain bikes and useful for general uphill and downhill. That said, you’ll find that Santa Cruz Bronson is lighter and a bit easier to navigate than what is typical of an Enduro bike.

Santa Cruz bikes used to be made by an independent company based in Santa Cruz, known for its generally acclaimed, high-end mountain bikes. That company was sold to Pon Holdings, a Dutch parent company in 2015. Pon Holdings is also the manufacturer of other mountain bike brands, Cervélo, Focus and Royal Dutch Gazelle.

What’s the difference between Carbon C and Carbon CC?

No matter what mountain bike you purchase, many, including Santa Cruz 5010 and Bronson, will give you the option between not only aluminium and carbon but between carbon c and carbon cc. While both offer strength and durability, Carbon C is more affordable but also heavier than  Carbon CC. You pay extra for Carbon CC to reduce the weight of the bike, but the good news is that both Carbon C and Carbon CC are equal in strength.

What’s the difference between Carbon C and Carbon CC?

No matter what mountain bike you purchase, many, including Santa Cruz 5010 and Bronson, will give you the option between not only aluminium and carbon but between carbon c and carbon cc. While both offer strength and durability, Carbon C is more affordable but also heavier than  Carbon CC. You pay extra for Carbon CC to reduce the weight of the bike, but the good news is that both Carbon C and Carbon CC are equal in strength.

Which is the better Santa Cruz mountain bike: 5010 or Bronson?

When it comes to comparing Santa Cruz 5010 vs Santa Cruz Bronson, keep in mind both come from a fairly acclaimed company. Santa Cruz is known to mostly produce high-quality mountain bikes that tend to perform well, but also tend to come at a price point that may require a bit of an investment.

We’ll be comparing on key criteria, and assess which bike is the better value for what riding situations.

How is Santa Cruz 5010 marketed vs Bronson?

Let’s start by looking at the branding differences between the two bikes.

How do the tires compare on Santa Cruz 5010 vs Bronson?

How does the weight of Santa Cruz 5010 compare with Bronson?

Bikes that are heavier tend to have more traction, while lightweight backs are more suited to quick acceleration and manoeuvres.

How does the suspension type compare for Santa Cruz 5010 vs Bronson?

Hardtail mountain bikes have rear suspension, while full suspension will have both front and rear. Full suspension bikes are more expensive, more suited with trails with obstacles, can accelerate more easily and tend to have a smoother ride. A hardtail requires less maintenance and are more cost-effective.

How does the rear travel compare for Santa Cruz 5010 vs Bronson?

Rear travel refers to the actual distance a wheel moves during rear compression. Short travel is normally defined as 80-120mm and suited for quick acceleration and moderate climbs, but more typical of an XC bike. For a good trail bike, we expect a range of 120-140mm, with the longer travel being a bit less efficient and quick, but also more suited to steeper climbs and descents.

What kind of technology is used for shock absorption?

What are the differences in geometry for Santa Cruz 5010 vs Bronson?

There are also some differences in bike angles, which impacts your ride as a whole. Seat angles are ideal in the mid-70s, but low 70s is acceptable. Most trail bikes have head tube angles in the range of expecting trail bikes to have 65-67°, with the lower end closer to Enduros, and vice versa.

Do we recommend Santa Cruz 5010 or Bronson?

Compared, it’s clear that both Santa Cruz 5010 and Bronson have excellent features, are made with quality, and can both be great options for mountain biking. If we had to pick, Santa Cruz Bronson just barely edges out Santa Cruz 5010. The slightly higher customer ratings and incredible balance of playful movement and both ascent and descent abilities means you’ll get just a bit more use of it, and maybe worth the price increase. Other features, including break types, are the same between the two bikes.

That said if you’re on a smaller budget, or don’t plan to do downhill riding, Santa Cruz 5010 should still fulfil your needs.

Trek Marlin 6 Review – is This Multipurpose Bike Worth Buying?

Pivot Switchblade Review: A bike for all trails

Santa Cruz Bronson Review: Does this Downhill Bike Live up to The Expectations?

Evil the Wreckoning Review – Can This Bike Handle the Toughest Trails?